“To hell with your opinion! I’ll take my own path, no matter what anyone else says!”

You know what I’d love–really, truly love? A shonen with a Badass female protagonist– a true female lead with no love interest. I want to feel absolutely blown away by her do-not-give-a-**** attitude. I want capable, empowered and fierce women with strong will and even stronger development.

If only such an anime existed…

SPOILER ALERT: ONE DOES, AND IT’S AMAZING. 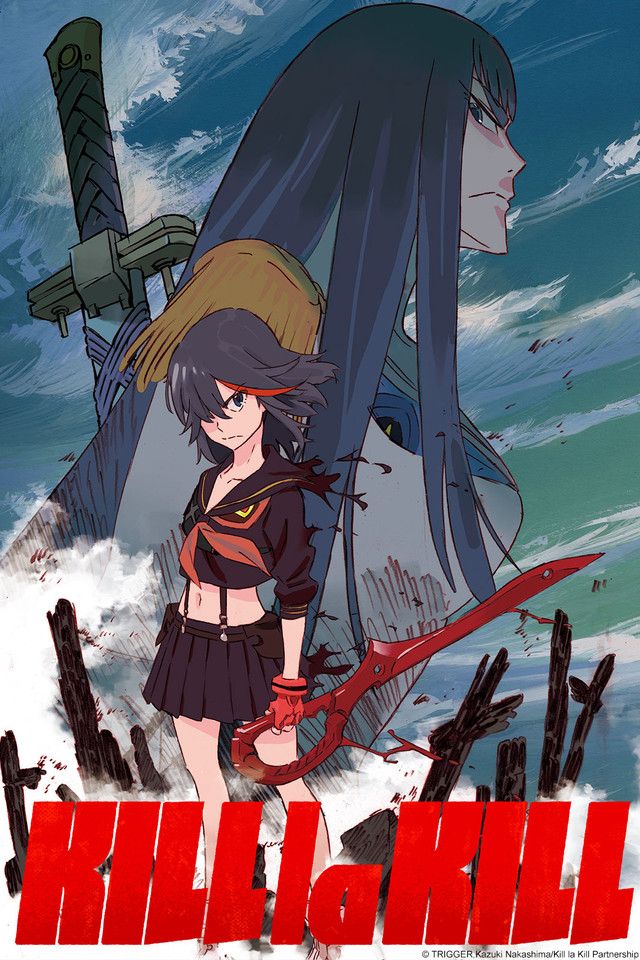 Kill la Kill  follows vagrant, scissorblade-wielding schoolgirl Ryuko Matoi on her search for her father’s killer. On her quest for vengeance, she engages in violent conflict with Satsuki Kiryuin, the iron-willed student council president of Honnouji Academy. Its students wear Goku Uniforms (極制服 Gokuseifuku) which give their wearers superhuman abilities because they are constructed with a special material known as Life Fibers (生命戦維 Seimei Sen’i, lit. “Life Battle-Fibers”). Ryuko, armed with her scissor-shaped longsword that can cut Goku Uniforms, challenges the council whilst on her search. She finds a sentient sailor uniform that she names Senketsu, a Kamui (神衣, lit. “Godrobe”), which is completely made of Life Fibers and transforms her so that she can face Kiryuin, her trials and obstacles.

I’ve heard many things about this anime, from fantastic fight scenes to face-palm inducing fanservice, and it has always been on my otaku radar. I finally decided to give it a go and lemme tell you, homies: my jaw hit the floor. It’s kind of like a magical girl anime, with blood and badassary.

In my experience—and I have a fair amount of experience with the amount of shows I’ve seen—an action anime which centered on a female protagonist was a pipe dream. Never mind a female who could not be more uninterested in romance and was more brash than beautiful! Forget about it!

And then I met my lovely fireball of a girl, Ryuko. Let me bask in her glory in her un-fuck-with-able-ness. My scissor-wielding thunderstorm will cut you down without hesitation and will love you with unyielding passion. Despite not knowing her father very well, her sense of duty to determine his murderer and avenge his death is unrivaled. Her ability to bare her fangs, regardless of the obstacles which lay before her, fills me with pride. You go, girl!

Gotta bleed in order to transform and sync with Senketsu? NBD: Imma just go ahead and pop this pin in my glove to get the party started. To be so willing and comfortable with pain in the face of pressure, to exhibit such unbridled tenacity and fierce conviction… hold me, I’m getting feelings.

Speaking of feelings: one of my favorite things about the series was Ryuko’s nonchalant attitude and ambivalence toward her own sexuality. Several times, Mako serves as Ryuko’s centering agent, pulling her back from the brink of destruction. The two even discuss going on a date. Futhermore, she kisses Nui when she wears Junketsu!

For me, this anime broke boundaries, and raised a middle finger (or scissor-blade?) to the master narrative of canonical shonen works. It has created a space to empower marginalized voices: women and LGBTQ, specifically. There really isn’t a male main character that shines–the corner stones are all women, who are not defined as mere sexual objects. Sure there’s some booby-bits and fanservice, but where else have we seen this kind of commitment to center around female ambition through the eyes of a woman or girl? Where else do we two women fight, and it’s not over a man?

The characterization is–as always for me– what makes this series so successful. Ryuko’s growth is realistic and believable. When she realizes she is not entirely human, but merged with life-fibers, she rejects Senketsu because she rejects herself. To do so is to demonstrate that he is a part of her, and the close bond they share. Satsuki, too, is enticing. When she executes her mutiny against her mother, her character does not have a pendulum switch to good or kind-hearted. She’s still ruthless and says hurtful things to Ryuko. Lawful neutral, if you will. Lovely. Perfection. More, please.

Perhaps the biggest fault of the series lies not in its strange human versus clothing dynamic, but with the plot’s focus and pacing. We learn Nui Harime is the assailant behind Ryuko’s late father’s murder in episode 11, “I’m Not Your Cute Woman”. This is problematic, because it’s Ryuko’s main driving force. You would think with that answer, she would be a.) set on going after Nui at all costs and also b.) slightly shocked in some capacity. The idea behind the COVERS as well was a bit unconvincing, but not out of reach due to the setting the series constructed in the beginning. I was mainly just confused with the sudden turn from REVENGE to SAVE THE WORLD. Though, we can argue beating Ragyo is revenge…

Thoughts? Lemme hear ’em in the comments below!