“You ain’t gonna know unless you climb up yerself. Ain’t no way to look if you don’t try.”

Barakamon centers on Seishū Handa, professional calligrapher, despite his young age. When the elderly curator of an exhibition criticizes his calligraphy for being too unoriginal (“like a textbook”), Seishū gets angry and punches him. Because of this, his father sends him off for a retreat on Gotō Island, near Kyūshū. There, he meets the colorful villagers, including the bright and cheerful Naru Kotoishi, a rambunctious six-year-old who visits Seishū everyday. As Seishū becomes familiar with these country townsfolk and assimilates into the community, he begins to find his own style.

But seriously, I’m an addict.

And while I certainly don’t condone adopting small children as a method for seeking a meaning in life, I feel like there is some truth underlying such hyperbole. As an aunt who recently temporarily moved in with her brother’s family and constantly exposed to her baby niece, I can say first-hand the therapeutic affect children can have– the perspective they bring is often overlooked and patronized. Often times, our youth can and will teach us more about life than we will for them.

Like Poco’s Udon World and Sweetness and Lightning, the show oozes adorableness. It capitalizes on the childish naivety and in doing so underscores its place in the slice of life genre. How this show differs is that rather than taking on a father-role, Handa becomes an older brother figure. He mentors and guides Naru, but the two also get into frequent spats, similar to siblings. Just look at these gifs:

That last one in particular gets me. Pretty sure my brother and I looked exactly like that sometimes.

In truth, the story’s success derives from its relationship between Handa and Naru, their adventures and the growth in their respective character arcs from interacting with each other. What begins as an abrasive annoyance becomes a simple steadiness and eventually a comfort for Handa.

While Naru is brash and boisterous, her brightness is truly what makes her such a charming character. We all know someone who, when we were kids, acted the same way. Some of us (myself included) were that kid. We’re filled with a sense of nostalgia, reminiscent for that unashamed, carefree nature–the unapologetic authenticity which seems to leave us as we mature, outgrown like old shoes or toys.

Handa’s growth is apparent. Anyone who says otherwise can fight me. This development manifests into his calligraphy, transforming from plain, rigid and boring into true creative art. 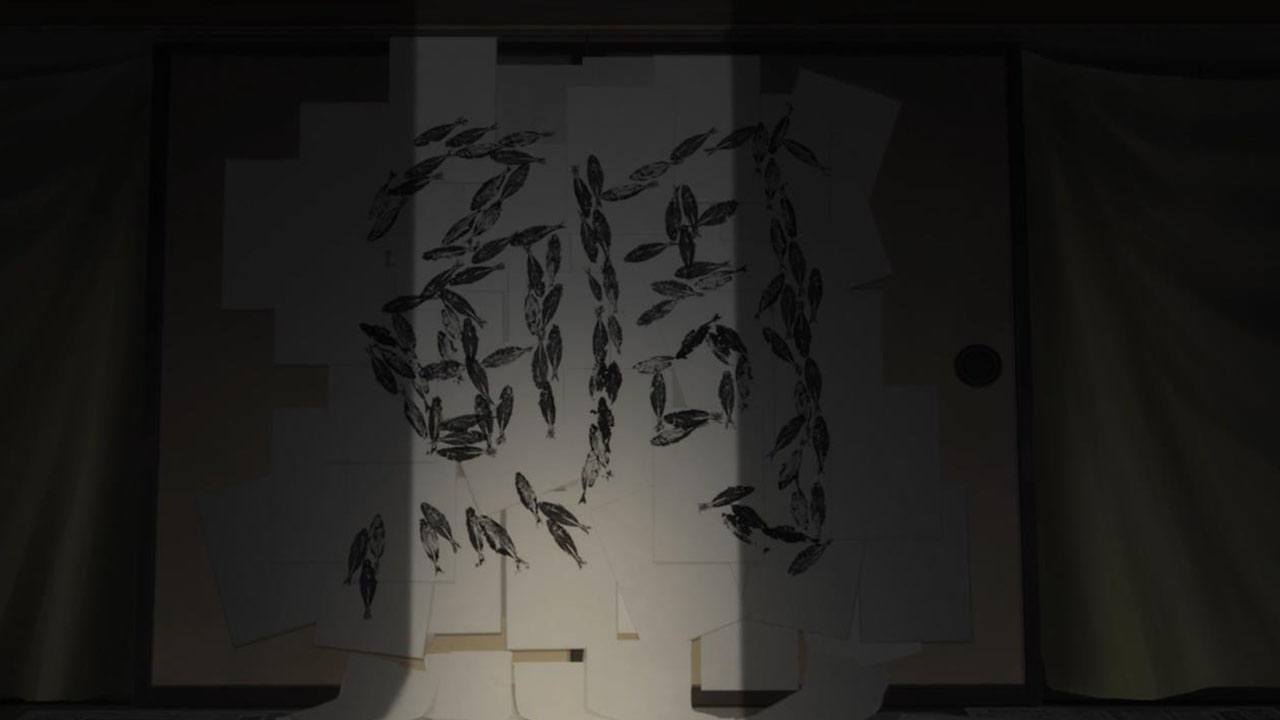 This piece he, as you can see, uses snapper to stamp onto the paper. The paper, too, is made of several sheets haphazardly slapped together; a far cry from his perfectionist style. My favorite comes after he’s lost in the mountains after falling off a cliff. He thinks he’s going to die. While looking up at the night sky, he sees a shooting star, and makes a wish to be saved:

Needless to say, the group finds him immediately afterwards. Upon returning home, he’s hit with the inspiration needed to complete his work for the Naruka Institute Exhibit, and this is my favorite work of the series: 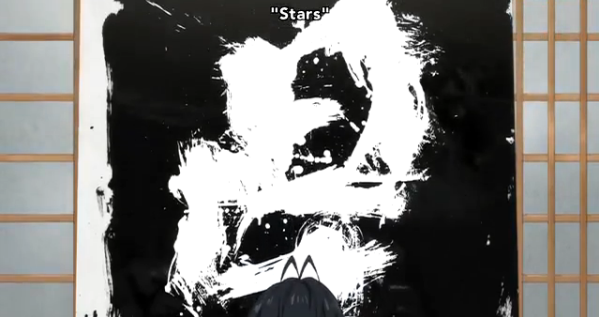 When I saw this, I literally had goosebumps. The audacity of light to shine despite darkness is so relevant, and in my opinion, reflects not only the stars he saw that night, but the guidance the townsfolk–especially Naru–continue to give him. We see this in his final entry, “Stone Wall” which is comprised of the townsfolk’s’ names, Naru’s being the largest:

This all being said, the show did have some lows. The animation is admittedly a bit rough, but I think that fits the show’s style well. The background characters did not get a real chance to shine or develop.

Ultimately, the show is well-paced, and feel-good. It offers charming escapism in the purest sense: it’s simple, relatable and overall just lovely.

That’s all for me! What should I review next? Let me know in the comments below!