“I’m going to keep delivering oxygen until the very end!”

Cells at Work! (Hataraku Saibō)  takes place inside the human body, where trillions of anthropomorphic cells each do their job to keep the body healthy. The series largely focuses on two such cells; a rookie red blood cell (Sekkekkyū), AE3803, who often gets lost during deliveries, and a relentless white blood cell (Hakkekkyū), U-1146, who fights against any germs that invade the body.

Maybe I’ve just been in a slice of life mood lately, but I’ve got two other series (probs more, let’s be honest) reviews coming your way from that genre! I’ve usually got several shows going at any given time, but there’s always a slice of life in the mix as a “cool down” episode after the more stressful series like AOT. They’re usually simple, easy to digest with non-chronological/linear plot points. Something we don’t always see, however, is a lot of learning opportunities as an audience.

I had been wanting to watch Cells at Work since it first came out this past summer, and seeing the promotional shots from social media, I knew I’d want to binge the series. It follows the standard slice tropes we’re used to, including romantic subtext, dramatic irony and a lovely does of funny, cinematic moments, like this one from the first episode:

It does a great job at not only showing us a day in the life of an immunity cell, but also teaching us about the biology and science behind the series. It makes it very realistic and believable. To be honest, I probably learned more about my body by watching this series than studying in school.

When we support this with the top-quality animation, soundtrack and metaphors, the viewer satisfaction increases tenfold. We’ve been talking a lot about the horror/humor balance recently, so I’m not going to dig too deep into that. I’ll just say that it’s in here, and it works well.

What sets this show apart is the treatment of its antagonist, whom is introduced and dealt with about halfway through the series. And what could be a more fearsome, more vile villain than a cancer cell bent on taking over a body.

If you’ve read My Anime Story, you know that I lost my mother to stage-four stomach cancer in January 2016. She was 48, and passed away less than eight months after diagnosis. To be honest, I still get a bit triggered if someone brings up terminal illness in conversation, and I often have to excuse myself because of intense grief and anger. Currently I’ve been very ill, and an ultrasound revealed I have a mass on my left ovary. A blood test confirmed slightly elevated tumor markers. Let’s just say I have some very personal reason to hate cancer.

So when I came to this point in the series, I was surprised. Cancer is the most terrifying thing I know. Yet, here the writers were, dealing with The Big Bad halfway into the show. I was taken aback, perhaps even insulted that they were dealing with the subject so casually.

However, I can assure my past self, and all you readers that this was no mistake.

When we think of cancer, we think terminal: we think chemotherapy and baldness and large tumors and weight loss surgeries. In reality, copying errors happen all the time in the body. We produce and destroy countless cancer cells in our lifetime. They really aren’t anything special, and having this two-episode arc in the middle of the series brings that to light. Furthermore, we sympathize with the cancer cell. We received some traumatic childhood backstory which pulls at our hearts. I mean, just look at this trembling little cutie: 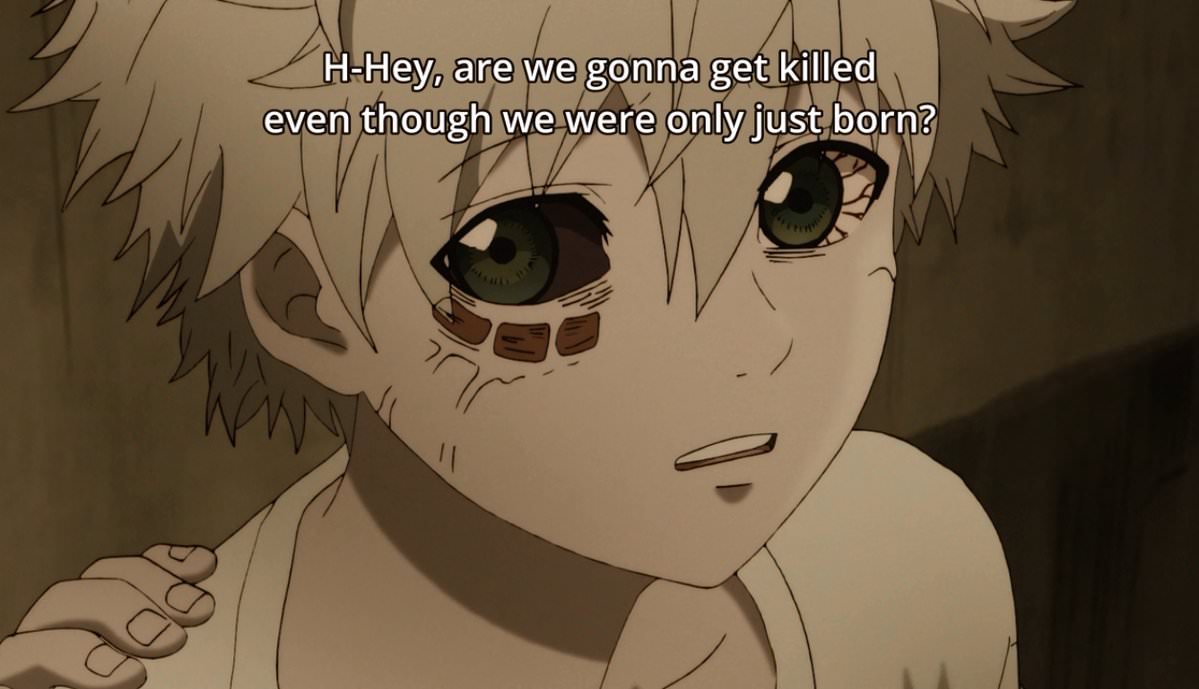 It makes me want to protect him no matter what!

His conversation with White Blood Cell is even worse, really. It’s painful and to be honest, I don’t want him to die.

Just… there aren’t many words to describe how great that antagonist writing was. Top shelf, guys. 10 out of 10. So we’re rocking on characterization (for the villain) and pacing. The plot climax was great and we get to see our Red Blood Cell do her thing with unyielding tenacity and spirit. She might get lost on the way, but she’s a fighter, that’s for sure!

There are, of course, things that could have been explored more. I would have liked to see White Blood Cell develop a bit, but overall, the series was really satisfying. Give it a try if you’re wanting a bit of schooling with your slice of life!