“This time is precious. But it’s flowing onward, and I can’t stop it.” 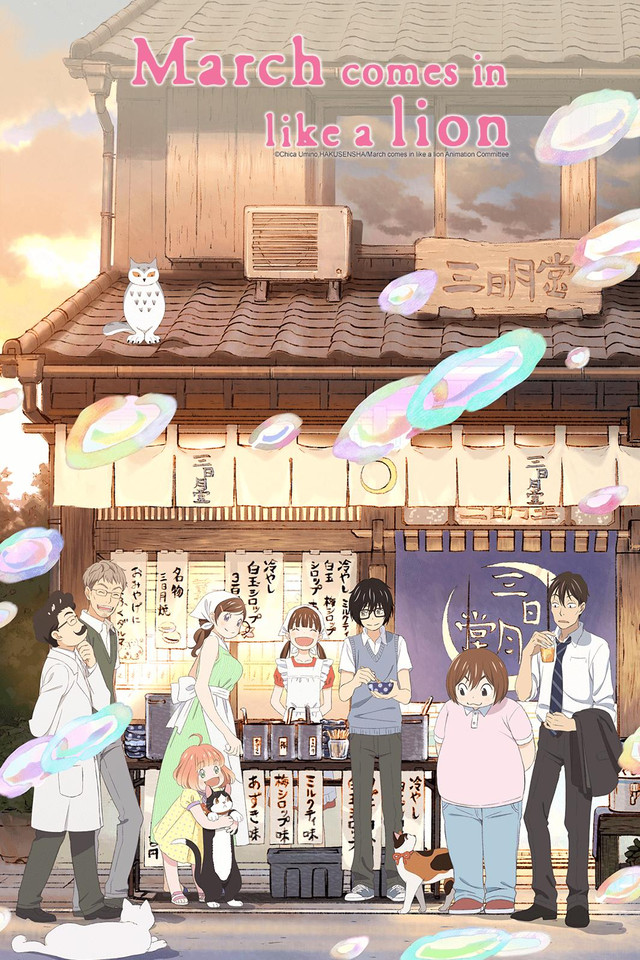 It’s a good second season, but it’s success really depends on what you’re expecting (i.e. if you’re expecting previous characters besides the mains to grow, you’re out of luck). In this season, the focus shifts less on Rei and his mental health to that of the other characters in the series. This isn’t necessarily a bad thing— developing Hina and Souya is a route I can support— however, the writers dropped a lot of the points which made season one so successful in my mind.

Gotou and Kyouko become nonexistent, which frankly is probably my biggest fault with this season. The plot revolved around these antagonists and their relationships with Rei as a complete antithesis to the relationships he has with the Kawamoto sisters. Throughout season one, Kyouko strikes a firm balance between maliciously toxic and needy frailty. Her character embodies a push-pull of I hate you, don’t leave me. There are numerous flashbacks to suggest Kyouko sexually assaults Rei, but it’s never brought to full light in the second season. When such clear effort was made to set up these plot points, it is beyond disappointing to see them not reach fruition. There’s a brief attempt at developing Gotou when he chooses to see his wife at the hospital, but this isn’t expanded upon either, and he doesn’t appear for the rest of the season.

Tatsuyuki (if you don’t remember who that is, it’s our blond cat man) is also nonexistent. What’s the point in spending time with his character if he’s just going to revert back to a flat and pallid dish?

And Nikaidou, our wonderful rolly-polly with kidney problems… what happened to you? Again, it’s fine to make him take a backseat if we’re focusing on other characters, but the treatment of his illness and Rei’s friendship with him was entirely lukewarm. Rei’s best friend collapsed and has been hospitalized, but he never calls or goes to see him? I find this increasingly difficult to believe. Rei may be a recluse who’s taking shogi more seriously, but he’s growing to the point where he cares deeply about our Nik-chan cinnamon roll.

I’m left puzzled. We can argue the writers are banking on a third season, and with it pacing will appear more organized, but there’s rarely a guarantee for multiple seasons–it’s a risk that I don’t think the show can afford to take.

Let’s talk about where the season focused on though: Hina’s bullying and her relationship with Rei. The bullying was paced well and convincingly presented. Her situation, her suffering and pain are emotionally jarring– it’s difficult not to cry when she’s crying because it’s heartbreakingly authentic. Just look at these tears:

It makes a lot of sense, when we consider Rei was bullied so much as a child (and admittedly, still is as an adult). Hina allows for a lot of Rei’s self-projection and reflection, and, perhaps more importantly, self-nurturing growth fueled by intense commitment to help someone he loves.

That being said, the nature of their relationship remains convoluted. It’s pretty clear that Rei has developed what we would call romantic feelings for Hina, specifically when he thinks ‘It’s Takahashi-kun after all’. With that said, the development of these feelings seem shallow and baseless. It’s strange, too, that Hina comes to embody the warmth of all three sisters–she becomes the sole focus for his drive, the sole savior in his life when it was Akari who “rescued” him in the first place.

The pacing is also unsettling. It’s the opposite of the first season, which takes place during the month of march. For this season, we go from summer to New Year in one episode, and I’m left feeling rather  cheated. Besides the timeline and relationship, Rei’s deafness, while an interesting concept, is too early implemented.

Now, you may be wondering: Annie, that’s a lot of criticism! Why such a high rating?

While I found things inconsistent with the first season, it was still emotionally resonant. It still provided convincing plot, great characterization for our leading protagonist, an unparalleled realism and authenticity in the SOL genre. It still made me cry at parts; it still had that beautiful soundtrack and animation, and in comparison to other series, it still ranks very highly in terms of quality.

It’s a great season, one worth watching and appreciating.

What about you? Disagree? Agree? Let me know in the comments below!

Thanks for stopping by and watch on, Annieme-niac!