“We’ll all end up in the same place eventually. As long as they’re alive, everyone’s present becomes a past.” 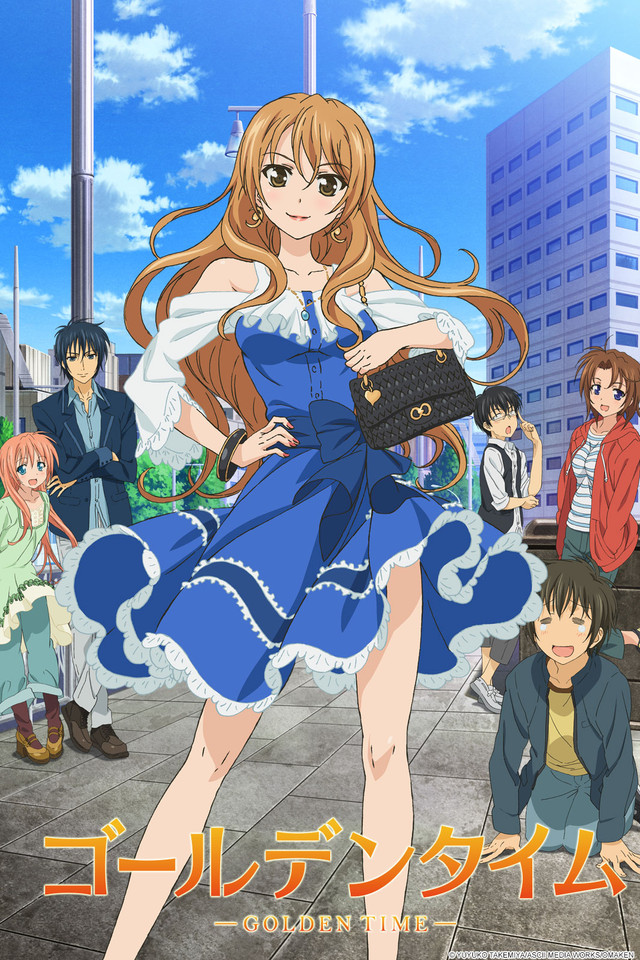 Golden Time follows Banri Tada, a college student freshman at a private law school in Tokyo. The day after he graduates from high school, he accidentally falls off a bridge and suffers from amnesia. He becomes friends with Mitsuo Yanagisawa and meets Kōko Kaga, a beautiful but obsessive woman who persists in courting Mitsuo, despite his resistance. Kōko and Banri join the cultural festival and meet second-year student Linda, who was Banri’s best friend and crush in high school. As the series progresses, Banri deals with his slowly re-emerging memories, which often come into conflict with a relationship that blooms between him and Kōko.

As you guys know, I go through stages with my binges, and usually I have a romance/slice of life/ comedy and an action/adventure in my queue going at all times. I often find myself pursuing MAL or going through Crunchyroll’s 4+star rated shows for suggestions on what to watch next, and most of the romance shows I end up going with are painfully disappointing. I know we just had bash yesterday, but I’m doing two in a row because that’s how frequent these shows pop up, and I’d like to save some folks from falling to the rating-trap.

I’ll say that I had high hopes for this anime, though. Written by the author of Toradora!, I attempted to shrug off a lot of my concerns in the first episodes. After all, I wasn’t a fan of Toradora! when I first started, so I should give this series a fair shot. And sure, there are some similarities, particularly with our leading lady.

Like Taiga, Kōko is ridiculously childish, spoiled and self-centered. She acts with little concern for how her choices will affect others, focusing solely on her love interest and little else. But where Taiga develops and her personality makes sense from her apparent abandonment, Kōko  remains stagnant. I’m sure there are people who disagree with me on this, who will reach for evidence on how her relationship with Banri changes her, that she grows and becomes her own person. But really? I’m not buying it at all.

Kōko goes from being obsessed with Mitsuo to being obsessed with Banri, almost overnight and in direct retaliation to Mitsuo rejecting her. Now, I could buy that: the idea that she’s rebounding, but that idea is never explored, it’s passed over with a wave of a hand, plastered with “true love” and destiny. The person she reacts coldly towards isn’t Linda, a woman who Banri had past feelings for, it’s Oka, Mitsuo’s initial crush. Kōko  goes so far as to suffocate Oka in this scene, which was supposed to be some sort of comedic element:

Perhaps worse than Kōko’s personality and action is the remaining characters’ views on them. During the above scene, Banri does nothing to intercept Kōko, and Oka could have really died. His character’s ambivalence towards her obsessive behavior, propagates society’s already complacent attitude for unhealthy relationships. In the first couple episodes, we have some opportunities intervene and challenge some of the stigma of these relationships. Mitsuo mentions how his peers would suggest he was lucky because Kōko was attractive and to stop complaining. However, none of the other characters react with any seriousness and instead, we’re met with another romanticism of stalking.

If the genders were reversed in this scenario, people would at least be concerned. A delicate maiden followed to college, despite her clear articulations that she isn’t interested in a relationship? How horrible! And indeed, it is horrible. As a victim of severe stalking, I can confirm it is some of the most frightening forms of torture, one which is rarely taken seriously by the law and authorities. But for men, this is tenfold: asking for help is weak; saying no is rejecting what it means to be a man. It’s upsetting that the show makes no attempt to explore this, and I was left utterly disappointed.

We don’t get much development for Mitsuo, Linda Oka-chan or 2D-kun, either. In fact, the majority of characterization applies to Banri, and his phantom. This dip into the supernatural was reminiscent of Waiting in the Summer, and was executed with about as much success: none. The triggering events for ghost-Banri’s appearance were too random and odd. The physical manifestation was interesting, but forced and unrealistic (specifically, the cursing was an entire eye-roll experience).

To top it all off, it was inconsistent: the finale’s proclamation that suddenly Linda could see ghost-Banri was frankly unforgivable. This went against all previous premises the story had built.

While the series had some meme-worthy experiences like the clip below, it was painfully mediocre.  PLEASE, ANIME GODS! GRANT US QUALITY ROMANCE SERIES!