“Father…Rest in peace. Let the smoke guide your soul to heaven. But I ask you for a final favor, let the flames burn with your strength.” 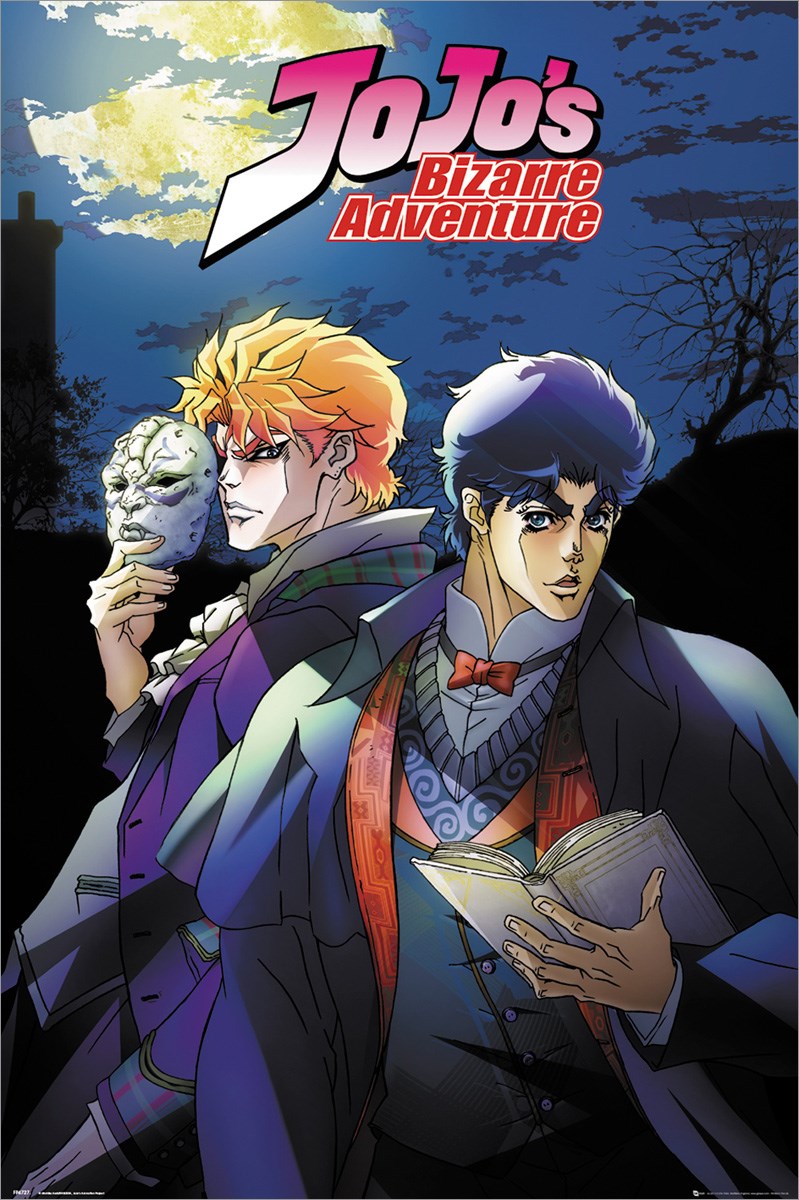 JoJo’s Bizarre Adventure (JoJo no Kimyō na Bōken) tells the story of the Joestar family, a family whose various members discover they are destined to take down supernatural foes using unique powers that they possess. This season covers the first two arcs with Johnathan Joestar and his grandson, Joseph Joestar as they learn an ability called Hamon to defeat their vampire foes.

GIVE ME THE MUSCLES.

I’ve been staying almost exclusively in the slice of life and romance genres recently, and that just isn’t right! Let’s go back to the basics: the good ol’ fashioned shounen showdown, the mysterious powers, the training arcs. I need them.

Jojo’s has been on my radar for a while now, though I admit I’ve been hesitant on starting the series… I knew I’d fall down the fandom hole and go on day-binges. And admittedly, that’s exactly what happened.

This technicolor extravaganza pays homage to its action and adventure ancestors. Its comic animation style, bangin’ soundtrack and blunt humor place it firmly in these genres, and we’re filled with nostalgia. The series has a retro style that screams 80’s. I can practically hear the soaring guitar solos and synth-waves. I mean, just—

Where series like Dance with the Dragons lacked exposition, JoJo more than makes up for them. The amount of explaining done by our characters is silly and unnecessary, particularly in the fight scenes. The verbal spouts slowed the pace of the fight down, making them feel much longer. Many times I found myself face-palming for the ‘I’m going to explain everything’ dialogue of the characters. And it’s not just what they said, it was how they said it. These comments particularly were so melodramatic to the point of making me cringe.

That being said, I found the series surprising: I didn’t expect Jonathan to die so soon, or for the name JoJo to carry on through his descendants like a family heirloom. It’s interesting to see the different personalities between the different Jojo’s, and also the different time periods represented. However, this could have been focused on a bit more: Jonathan was a very noble gentleman and it would have been interesting to see Joseph struggle beneath everyone’s expectations that he could never live up to.

Nevertheless, the plot was simple and enjoyable. It was satisfying not knowing when or if the characters would die, much less how. Caesar’s death was particularly well written and emotionally charged, and while I wasn’t sniffling in my seat, I was struck with a pang of loss.

Though short-lived, the characters themselves were convincing—their motives, strong and their weaknesses apparent. The villains were, for the most part, treated well. Wamuu’s warrior heart was the most successful. He, over all of the other antagonists, felt as if he was truly a protagonist in his own story: his willingness to fight JoJo fairly, to test his own strength, his honorable nature made him easy to like. Our big bads, weren’t as lucky…

Kars felt incredibly flat and lacking any roundness. Why does he want to take over the world? What’s so great about sunlight? These items were never fully addressed. We even lacked a sob-story, something that had been bestowed onto Dio. Kars’ shallow nature made him less impactful than the other villains,  and therefore I had less of an investment during his battle and death.

Ultimately, the show is really good! I’m interested in seeing how the series progresses with the introduction to more JoJo’s and seasons!