The lovely JamageCtrl suggested I write some character studies on the blog and given my extensive creative writing background, I figured I’d give it a go! Y’all know characters are the make-or-break for me: I consider them the most important component in good storytelling. Honestly, it doesn’t matter if the plot is boring, the pacing is terrible, the realism is whack or the authenticity is off. Well, no, it does matter, but we can stem the bleeding; it’s not an end-all-be-all. Why? Because character investment is the strongest bond in writing— the speaker’s voice must resonate with us, must intrigue us. Ideally, it’ll question us. They’re what keeps us coming back for more when nothing else can, and the most important voice belongs to the villain: is the most important character in any story. I’ll say that again:

The villain is the most important character in any story.

Yes, my dear readers, it is Voldemort, not Harry, who is truly interesting. The Joker, and not Batman who serves as the catalyst for plot and depth. There are a couple reasons for this, but the largest one is protagonists have to be plain in order to allow for audience projection and immersion.

Today, we’re looking at my favorite anime antagonist of all time: Meruem from Hunter x Hunter. Often referred to as “the King” in the series, he is the most powerful offspring of the Chimera Ant Queen and one of the most intriguing, round and multifaceted villains of the anime world.

After his birth, the King’s cruel nature is apparent. His tyrannical and violent leadership style coupled with his haughty personality created a standard Big Bad. He didn’t care his mother died after giving birth to him, he doesn’t blink an eye at killing his own soldiers and eating them if he deems them disrespectful. He is about as sympathizing as a tax collector and views humans as a lessor species whose sole purpose it to provide food, as shown when he kills and devours a child, only to spit out its flesh because it’s “disgusting”. 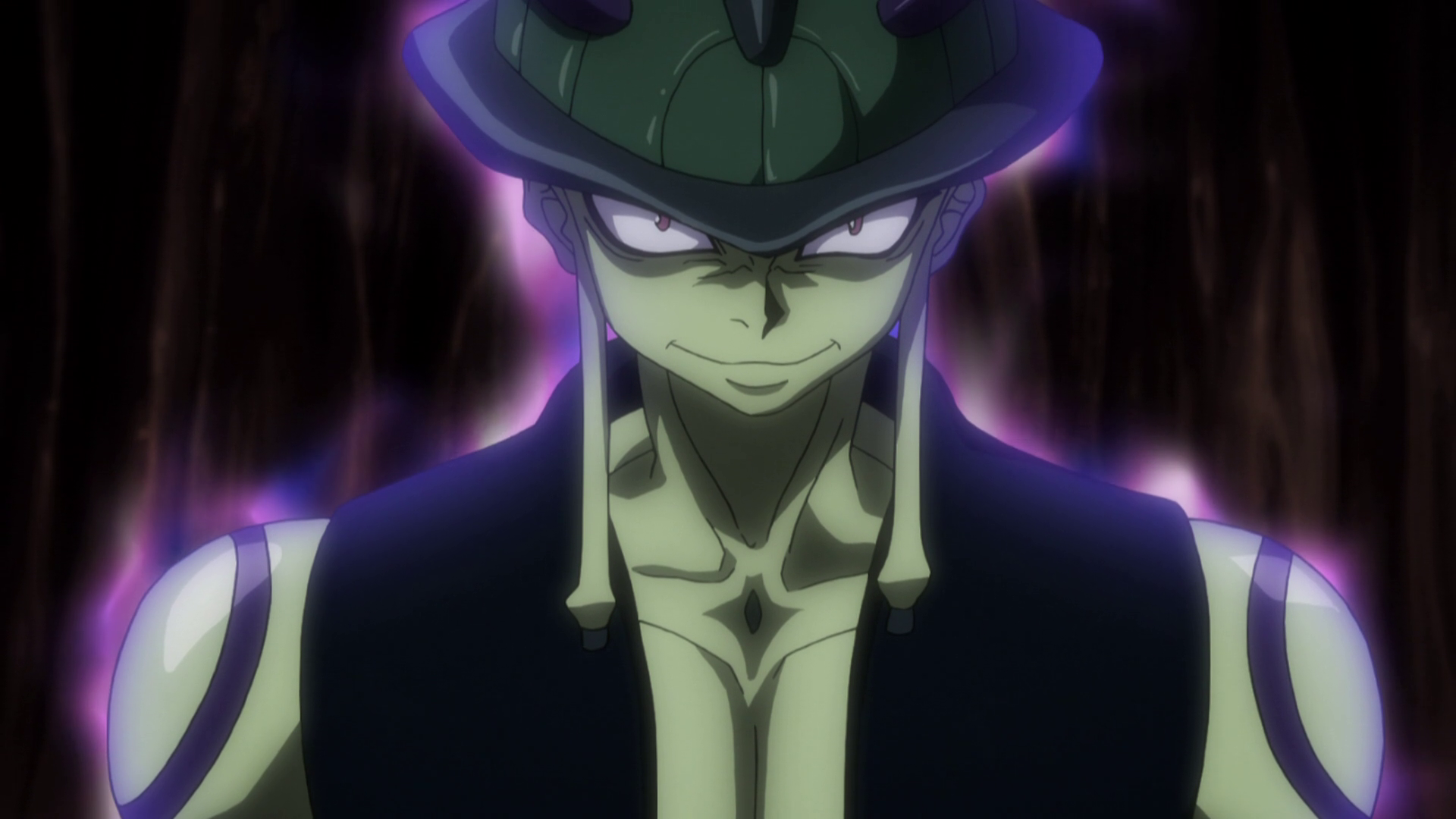 And this is where a lot of series stop. The bad is just bad. But we must remember that villains are characters and should not be reduced to caricatures. They should have goals and ambitions, yes, but more importantly they need motives for those ambitions. We mustn’t forget one of the cardinal rules of villain writing:

Every villain is the protagonist in their world.

Meruem decides to kill some time (as well as people) by playing some board games. He challenges the best players in Japan, learns the games, beats them and then executes them. In doing so, he learns tactical measures, strategies and analytical reasoning. Enter, this snot-laden bean:

Komugi is blind, daft and lives solely for Gungi, or as I like to call it, 3D chess. So they play and he loses. Again, and again and again. As the King improves, so too does Komugi’s play. He’s left frustrated initially, and even reveals that he will kill her should she fail. He also insists they should play without breaks, despite Komugi’s frail disposition.

The King is a proud dude. Confident and cool under pressure, he shows his conviction with action. He attempts to defeat Komugi by directly challenging her resolve under the assumption that humans are weak to fear and greed. However, she shows neither. In response, she suggests that instead of taking her arm if she loses, he should take her life. The King responds by ripping off his own arm as an apology.

This frustration evolves into respect, and eventually, profound care. When he asks for Komugi’s name, and she asks for his, he’s left in an existential crisis. He begins to question the differences between ant and human. He longs to understand his purpose, as well as his unique, albeit fractured, identity. It is at this moment when we remember that Meruem is half-human and half-ant. He embodies the hybrid subject and serves as an allegory for the binary opposition war waged between cultures.

He asks his subordinates what his name is, to which they can offer no response. He then says the following: “Because of Komugi, I’ve learned that there are different forms of strength. Even on my way here, I killed a child. That child may have had the talent to surpass me in something… I trampled over that seed. For no reason at all, I trampled over it.”

Ahhhh look at that character development. Except it doesn’t stay that way. The King sees his act of trampling as further evidence of his superiority. This is one of my favorite moments of his character, because of its realism. Growth is not a purely positive trajectory: it often has troughs from relapse, regression and failure. We doubt ourselves; our wills weaken. He succumbs to violence, and decides to kill Komugi. When he returns, he opens the door to find a bird attacking Komugi. He disposes of the bird and rushes to her side.

At this point, he’s focused solely on her injuries. He subconsciously changes his mind. His emotions and values dictate his actions. Why she didn’t call for help; what he should do with her state? The King shows for the first time selflessness, an awareness for others, and the fierce desire to protect someone dear to him.

With my health as it is, I lose consciousness a lot, and most of the time, I’m walking while this happens. This led to a lot of falls, bruises and a concussion, sure. But it also had an affect on the people who cared about and for me. They were frustrated that I didn’t ask for help prior to moving or didn’t rely on them, and I suspect they were angry with themselves for not being with me or ensuring my safety.

Meruem’s actions are rooted in love and responsibility. A character who once valued nothing but power now crouches by and worries for the weak. He’s a testament that we’re capable of growth despite our wrongdoings.

I mentioned this scene in my I didn’t think I’d cry post, but it’s worth looking at again. The Dragon Dive rains down upon the palace, fatally injuring Komugi. His first priority is not to obliterate the invading enemies or defend the palace. Instead, his concern hones onto Komugi and when he discovers her mortally wounded, his character becomes quiet, small and scared. He orders Nerferpitour to heal her, and agrees to fight Netero, but only if it’s done away from the palace where Komugi won’t be in danger.

reusing these gifs because i enjoy angst and crying

Show me a more tender caress, a more gentle touch.

The fight with Netero is undoubtedly a big point for discussion. He makes no move for violence. Instead, he says he wants to have a discussion. This guy, the war monger, the mass-murder, the apex of evolution chooses to have a chat with his enemy rather than a brawl. If that isn’t growth, I don’t know what is. In this scene, Meruem demonstrates more humanity than the human protagonists, including Gon.

“You fight with the resolve to lose? I do not understand. You fight for the human race? If so, then know that my actions are in fact for their benefit. For example, in human society, lands are divided by national border, much like territorial markings. On the right side of the border, children may starve to death. While on the left, scum who do nothing have everything they need. Absolute madness. I shall crush that madness… and create world so fair, the concept of inequality will be forgotten! I concede that I will initially use power and terror to accomplish my objective. But I will only do so to the extent necessary to maintain order. I have learnt what power is meant to be used for. To protect the weak, who deserve to live. Power is not meant to be used to torment the defeated. ”

This isn’t a rant. It’s not some baseless accusation. It’s rooted firmly in evidence that exposes the very grim side of human nature:  our indifference, our apathy. These are the questions posed by politics, religion and philosophy and they resonate with our world’s constraints. Meruem forces us to confront our own real cruelties, to assess the ethics of our actions and the hypocrisy they hold. I mentioned how he serves an allegory for imperialism or colonialism earlier, but it’s fair to say he’s equally one for environmentalism.

“These humans are definitely foolish creatures. Think as hard as those weak brains of yours can manage. Do you humans ever listen to the cries of mercy coming from the pigs and cows you slaughter?”

I’m left with goosebumps. Villains should elicit an uncanniness, an uncomfortable familiarity. They reveal to us truths that we would otherwise prefer to ignore.

Mereum, through his interactions with Komugi and Netero, comes to recognize the human spirit, that great fire of tenacity and potential to continually redefine one’s own limits.

The King experiences a slight regression with his temporary amnesia, but shows instances of mercy and understanding towards his deceiving subordinates, something his previous self would never have considered. His ability to empathize and forgive are greater than any other character’s in this series, and once he remembers Komugi, his attention shifts again from world-domination to her wellbeing.

He bows to Palm, despite his caste-system hierarchy. His sole wish is to die with Komugi playing Gungi, and he resorts to a dignified begging. This is so profoundly moving. When a character we know is strong shows tremendous vulnerability, accepts defeat and humility, their stature blossoms in our minds. Meruem’s confrontation with his mortality is an astute one: how do we spend our remaining time? Revenge? Glory? He chooses the company of the person he loves, one who doesn’t know his species, has now prejudice as to what he looks like, but has undoubtedly altered his perspective. How plain a pleasure, how simple a wish to die with the one who truly knows us best, and accepts us.

His death is about as un-shounen as it can get. Yeah, he has an epic battle with Netero, but what kills him is a poison, something he can’t see, touch or stop. Blind and scared, he repeatedly asks Komugi if she is still there, regressing into a childlike state with his need for constant reassurance. It is important to, that we recognize he doesn’t order Komugi to stay with him, nor does he withhold the truth that doing so will result in her eminent death. Similarly, he doesn’t demand that she leave him for fear that she will die. Instead, he gives her the simple facts and a choice, an action that shows tremendous trust and respect. His last wish is that she holds his hand and at this point, I’m sobbing. How small and scared our lad has become. This intimacy is so moving, that we’re left wanting him to live somehow.

A good villain is the most difficult and most important part in storytelling, and for me, Meruem is unmatched. What are your thoughts on villains? Who would you say is the best? Let me know in the comments below!