“If I can be the best in the world at something, then I think it’s worth a shot.” 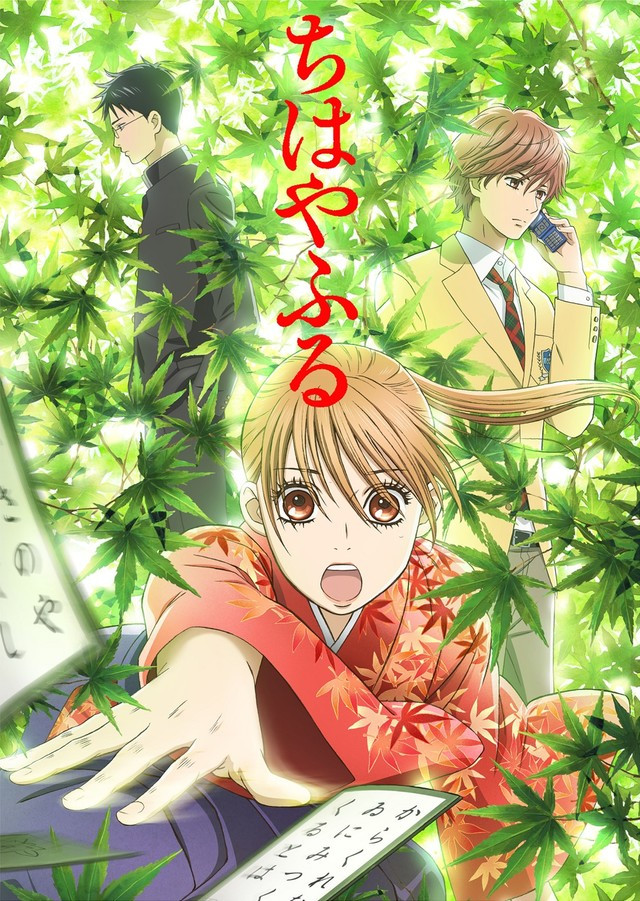 Chihayafuru follows Chihaya Ayase, a girl who, while initially only supports her sister’s modeling career, discovers a love for Karuta by the likes of a quiet transfer student, Arata Wayata in elementary school. Karuta is a physically and mentally strenuous card game involving the classic Japanese anthology of 100 poets. Arata believes Chihaya as the talent to become Queen– the greatest female player in Karuta. Inspired that she might become the best at something, Chihaya becomes Karuta-obsessed, joining the Shiranami Society and honing her skills. While Arata moves away and her friend, Taichi Mashima, enrolls in a different middle school, Chihaya continues to improve.

In high school she reunites with Taichi and the two start a Karuta Club in hopes to make Chiaya’s dream of becoming the best in Japan a reality.

You know I love sports anime, but what about a sports anime that’s a little less… well, sporty?

Chihayafuru makes a case for other competitive mediums in anime. I’ll note that there are other tabletop game anime out there, including my March Comes in like a Lion fave, but this series really does show how intense non-sport sports can be. As a person who has competed at international levels for slam poetry, I found this super. Y’all know I’m as uncoordinated as a fish, but I’m fiercely competitive. After every poetry slam, every round, I was left physically, mentally and emotionally exhausted.

These games are physically and mentally draining. You’re constantly on edge, resetting your body to go from zero to full-throttle for 25, 50 or more times in a row. Many of the matches come down to your reflexes and how fast one can move their body. This tense and release aspect mirrors conventional sports, and adds a new flavor with the inclusion of memorization, card counting, and placement strategy.  You have to be able to completely wipe your brain of previous matches’ card placements, and even the card placement of the start of the current match.

Additionally, the side-swipes are similar to swimmers who do that whole swing their arms across their body and smack their sides thing. Does that description even make sense? Well anyway, the point is to throw your opponent of their game– to get into their head and intimidate them. Furthermore, you have individual and team bouts, you have  “aces”, captains, training regimes and scrims.

So it’s sporty. Nice. It’s also a high school / slice of life / romance piece. If you like those genres and want to try out sports, or vice versa, give this series a shot. It does a fairly good job of mixing the genres. We get a love triangle that’s believable.

The characters are likable enough but are, for the most part too shallow for my liking. Kana, in particular was fumbled. Her reasons for joining the club are sound, and she offers us a fresh perspective: we’re reminded that these cards are poems. She reminds us about the dignity and intention rooted in karuta history and she’s able to offer insight to both viewers and fellow characters. However, her character itself is flat. I have a fundamental problem with her quote that poems are feelings in meter, as free verse has been a thing since the mid 1800s. I also disagree with her proclamation that it’s for the elite, but that’s not where my real problem lies. Kana is at best, a plot device which provides exposition and growth. This changes in the second season, thankfully, but for the first season, it was pretty difficult to stomach.

Taichi is our most interesting and multifaceted character. His motives seem the most authentic and his actions mirror that of his age, even if they’re solely love based. When anything in the plot has to deal with Arata, he loses his sh*t. He becomes impatient, angry and irritable. It’s nice to see that his rivalry (either real or imagined) leads to his own character growth.

The pacing is okay. We sometimes get flashbacks of things that happened within the same episode, which is completely unnecessary and a waste of valuable screen time. Macro pacing is much better though.

Ultimately, the series is beautifully animated, and it’s an enjoyable watch. The third season is scheduled for release in October, so get watching while there’s still time to catch up!