“If there isn’t one, then let’s make a place for humans to live outside. Let’s change the world.” 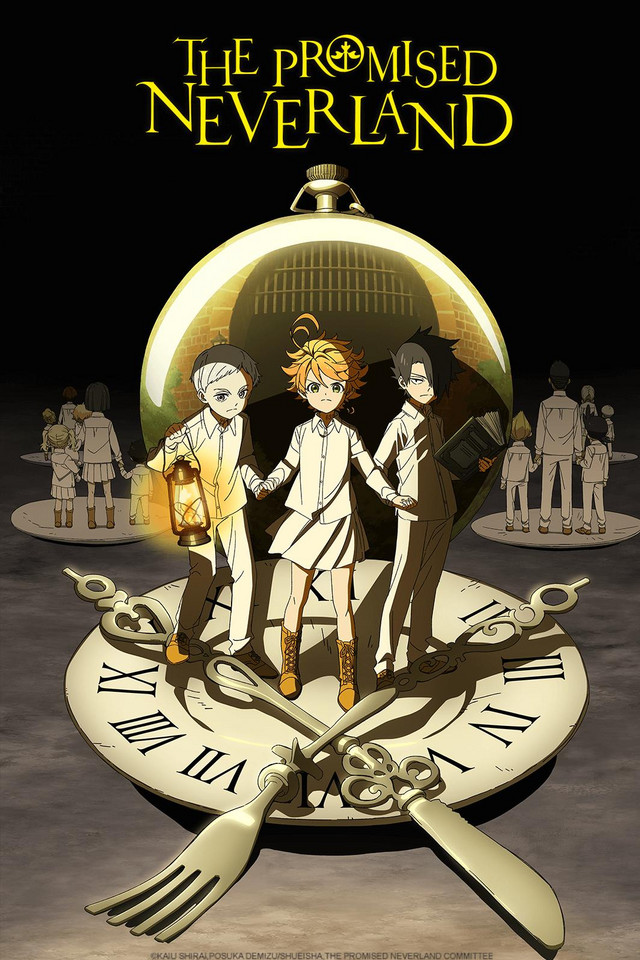 The Promised Neverland (Yakusoku no Nebārando) follows Emma, a rambunctious 11-year-old girl living at the Grace Field House orphanage in 2045. Emma lives happily with 37 other children, including her best friends Norman and Ray. Aside from taking a daily written test, they are allowed free time to play outside, so long as they do not go past the fence or near the gate. Every few months, a child is adopted and sent to a new family.

One night, Emma and Norman discover the truth hiding behind “Mama” Isabella’s smile, and the cruel fate for those living at this Utopian orphanage.

Characterization: 4.5/5
Very good, for the most part. Isabella/Mama is the highlight. However, one protagonist rings a bit flat. Emma and Ray remain solid voices throughout the series with adequate arcs and pacing.

Plot: 4.5/5
The plot is admittedly very predictable. That said, still good and well-paced. The story is still interesting and gripping, mainly because of how it’s being presented (sound and animation).

Realism & Authenticity: 4/5
Full points for authenticity, less so for realism. Definitely fits into the genres of psychological thriller and horror, as well as adventure. Questions of realism come into play when discussing the children’s intelligence, choices and plot circumstances.

Sound & Animation: 5/5
The cinematography of the series is top-notch, and I don’t say that lightly. I put the animation / camera angles and sound design on the same level as March Comes in like a Lion, the show which I feel does it the best out of contemporary anime. A+++++

I’ll start off by saying that I intentionally waited for all of the episodes to be released before starting this series. I often do this if it is something that is hyped-up and that I feel I’ll want to binge. I wasn’t wrong. This series ended up being one of my favorites that I watched in 2019. To be honest, I wasn’t familiar with the story and I managed to stay entirely spoiler-free. The only thing I knew about the series was a thumbnail depicting Emma running through the trees.

I hadn’t read any summaries or about the shows. None of that. So at first glance I thought it would be a light-hearted, fun, adventure series that made some base allusions to Peter Pan. I thought it would mostly center on some coming of age stuff and nakama/friendship. I suppose in a way, it was: Emma, Norman and Ray lose their innocence and rely on each other to survive. But come on. I wasn’t expecting this. To be fair, I did consider the possibility of horror–after all, Peter Pan is a horror story. The children never grow up because he kills them– but I didn’t consider human farms and demons.

I’ve included horror in my tags because it is a horror story.  But this isn’t a cliched look how much blood and guts and violence we can slap the audience’s faces with. If you’re looking for a show with gore, this probably isn’t for you. If, however, you prefer a quieter horror, then this might be up your alley! This series identifies as a psychological thriller, and in truth the abuse these children face require intense mental and emotional resiliency.

This was better than Attack on Titan Season 3.

Before you get out your omni-directional mobility gear and go for my nape, hear me out.

I’m not saying AOT is a bad series: it’s truly a canonical giant for a lot of reasons. That said, the third season was a hot mess. There are a lot of reasons for this, and I’m not going to address them here, because this isn’t an AOT review or essay. I will say briefly that in terms of creating actually gripping suspense with tropes and parodies we have seen countless times, Promised Neverland executes much better than AOT. By a lot. And that’s due to a variety of reasons, some of which I’m going to talk about here in this review.

This is one of the most cinematic series I’ve seen in a long time. Its use of camera angles, cuts and panning are exquisite. While we know what will happen, we don’t know how it will happen. Or, rather, how it will be presented. The animation and sound design build tension and heighten viewer experience. Often, we will walk down the hallway in first-person perspective, each step painfully slow. We turn the corners; we feel the sweat begin to clam our hands.

The use of sound— and lack thereof— is glorious. The Promised Neverland does what I wish more anime series and presenters practiced: the pause.

When I switched from being a conventional poet to being a spoken word artist and performance poet, I began to think about things which never before crossed my mind: volume, cadence and pacing, body language, accent— all of these things now factored into how my poem would be received. Eventually, I learned the art of balancing high-impact cascades of words against hushed, purposely slow delivery. When I finally got to the end of the stanza–the real punch of the poem– I let it hang in the air, let it press its hands on our heads and backs until we can no longer bear its weight.

There’s something uncomfortable about silence. The waiting and suspense is a solitary experience: the silence is isolating. It’s unnerving. This show reaches for dripping water, creaking floors and rushed breaths.

In this scene all you can hear is the clock’s ticking. Clocks are cliche symbols for suspense. If I had a dollar for every story or film/show I’ve witnessed use this device, I wouldn’t have any student debt. So let’s just say I kinda dread seeing it in media. However, Promised Neverland doesn’t over use these devices: it finds different ways to show them.

The plot is predictable. All of the twists are intuitive and expected, probably because the story tells more than shows in certain moments. It’s like they’ve got a huge red sign saying: HEY! Remember this for later! This can get on viewers’ nerves, but overall, we still have a very good viewer experience. The plot is paced well and the story doesn’t feel rushed, or it does but in a good way. In a they don’t have much time to figure stuff out way. For a story that holds some of the biggest tropes in literature, there’s decent depth. We’ve all read or seen post-apocalyptic / dystopia / humans are now hunted works; We know how they stories go. Let’s talk a bit about what happens to Norman.

There’s a call from headquarters, and Norman becomes the next victim of Grace Field House. He, Emma and Ray decide he will escape into the woods and avoid the harvest, but to Emma and Ray’s disappointment, Norman returns to the house at sunset and painfully says goodbye. His sacrifice isn’t anything novel, in fact it’s a tale we’ve known for ages from many different sources, including religion. In this way, his willing and voluntary return to his “death” serves as a biblical allusion to Christ. Norman understands his suffering will result in saving the other children, a burden he welcomes and carries with unyielding shoulders. Furthermore, we don’t actually see him die. He’s taken to a room by the gate, he sees something, gets this shocked expression and that’s it. That’s all we get from Norman. My theory is that he isn’t dead, but has been sent off somewhere. Perhaps he’s even recruited to work at HQ for our baddies. Who knows.

Regardless on what happens to him, he acts as our all-knowing figure: he comes up with the plan that Emma and the other children will carry out and is, quite frankly, a near-perfect being.

Think about it. What faults does this boy have? What character flaws?

Now, this does raise some red flags for me. If he doesn’t have human faults, then he’s not a very good character. And it truth, he’s the blandest and least relatable of our protagonists. But let’s move on to a bigger character/plot flaw: the demons.

This is the worst. Okay, it’s not the worst, but it’s pretty bad. Why depict these guys so early on, as well as the central structure that controls the Mamas and Sisters. Why show the demons sitting around the table talking about the festival/ceremony, Tifari, and The Big Bad, referred to only as ‘Him’. It’s not necessary. Isabella mentions both at another time. Revealing them so early is just another way the series relies on telling, rather than allowing the suspense to build to a reveal. These characters are so flat, it’s not even funny. Or real villains for the season are Mama and Sister Krone, so let’s talk about them. 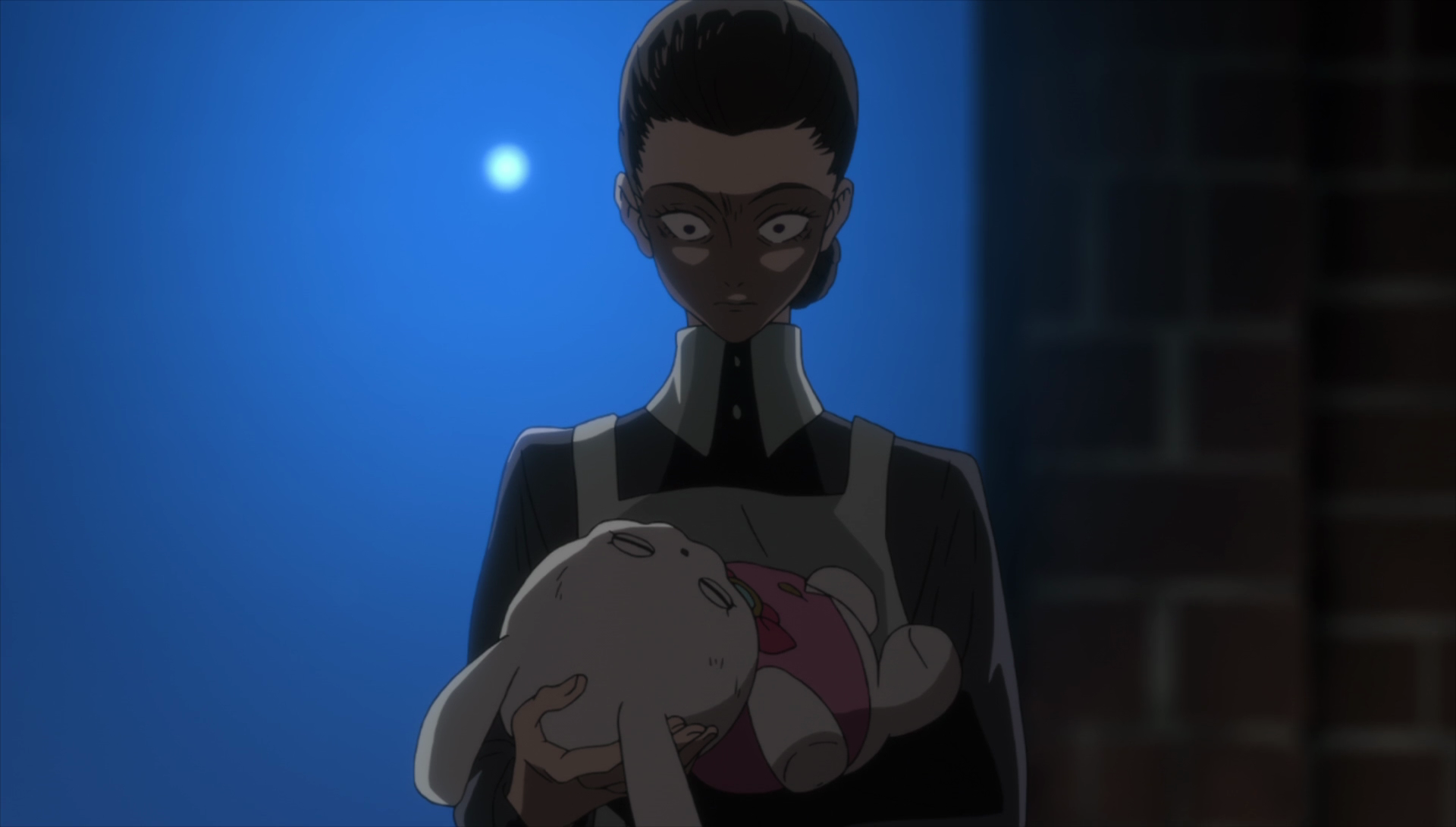 Isabella is probably the most interesting character of the series, and she’s treated with careful and delicate hands by our writers. Initially creepy and terrifying, as depicted above (episode 1), her character eventually reveals small glimmers of humanity. When she discovers Ray is her child (depicted in flashback), and Ray asks why she gave birth to him, she replies: “survival”. We realize that Isabella, just like the children, is fighting to survive. Furthermore, we discover her pain: she, too, has lost those for whom she cared deeply. She had to say goodbye to her Norman, a string-strumming lad named Leslie.

Isabella deeply loves her children while they under her care. It’s not as if she enjoys watching the children die. She’s merely doing what she feels she must to stay alive. In the last episode, after her children have escaped Grace Field House, she wishes them well. Interestingly, her hair is unbound and flowing freely– a metaphor for her natural, surprisingly young self. For the first time that we’ve seen her as an adult, Isabella looks small. Scared. She looks hauntingly vulnerable, tired and resigned. Just check out this gif:

The rest of the characterization is pretty good. This work is able to capture a tricky balance of shattering our protagonists idyllic life while maintaining (and reminding the audience of) their status as children. Emma’s insistence on escaping with everyone demonstrates not only naivety but a childish stubbornness. One particular question, though, is character decision and realism. There are several instances that come to mind: repeatedly talking in the open about escape plans and Don and Gilda’s venture into Mama’s “secret office” are two that stuck out to me as completely unbelievable and stupid when we consider the children’s supposed intelligence.

For the most part, the kids are exponentially smarter and more capable than in real life, and makes the series lose a bit of credibility. Phil’s a great example of this. We know he’s smart from the tests. He finds the circles in the books from William Minerva, which turns out to be a morse code. He sees sister Krone and mama acting weird. Even so, he’s too accepting that Mama is bad, that the children are all livestock and he, along with the other four-and-unders will be left behind during the escape. I’m not saying young children can’t be incredibly observant, astute and intelligent, but I’m saying that this  conclusion wasn’t earned.

Ultimately, though, it’s an incredible watch that I highly recommend!