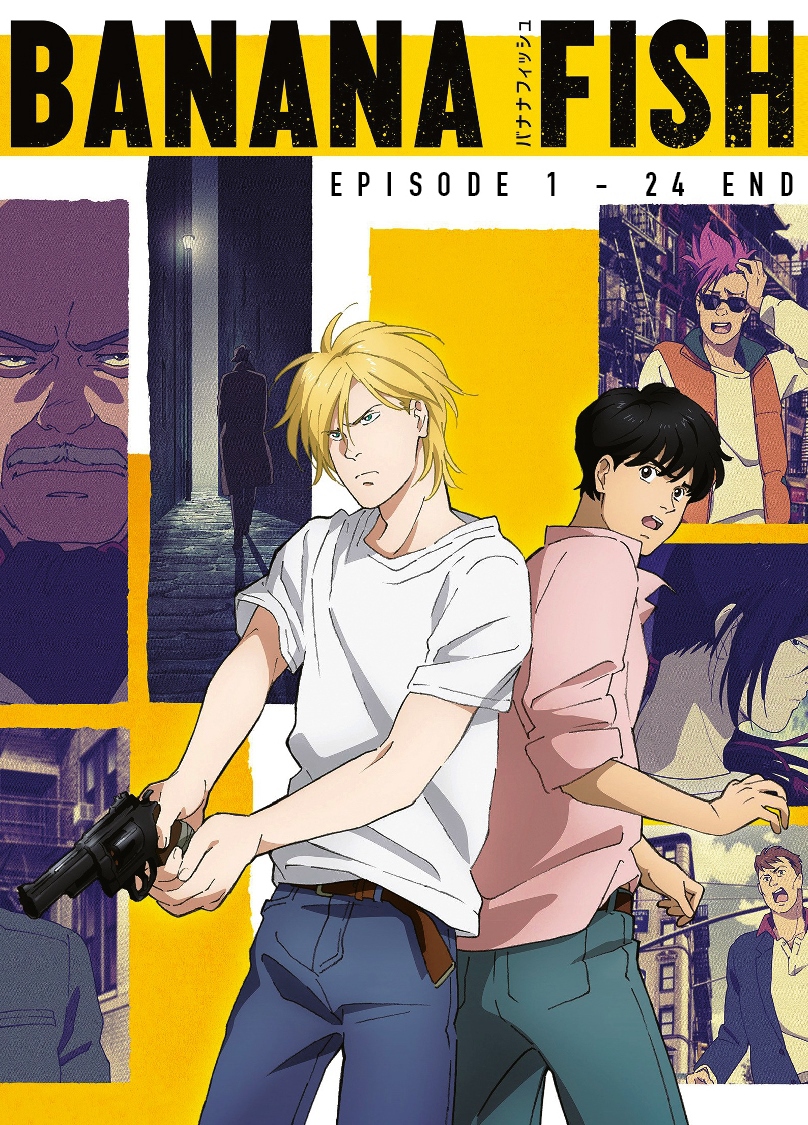 Please take care as you read this article. It’s heavy and at times difficult to carry on with, but I hope you will try to and that you find it useful in some capacity. Get yourself a cup of tea and take as many breaks as you need. 💙

Very few series challenge Noragami for its place as my all-time favorite anime series. However when I first heard about Banana Fish– a year after its release–, I knew there may be a new king sat upon that cherished throne. There were two reasons for this: 1.) it dealt with the long-term effects trauma has on a person as they grow from child to adolescent to young adult. 2.) It declared itself as an action shoujo series, and therefore already set itself a high bar of breaking genre stereotypes and blending themes.

The series takes more than its name from “A Perfect Day for Bananafish”, a postmodernist short story by J.D. Salinger. The concepts of war, PTSD and human greed are apparent in both works, sure. But perhaps the most important silk-thread connecting them belongs to their unification (and ultimately, separation) of two seemingly mutually exclusive spaces.

For those unfamiliar with the work, here’s a brief summary of the short story set in wealthy Florida:

Y’all, this is a super abridged version of the story, which lacks the language intricacies found in the text. I suggest you read it, rather than rely on my (or any) plot summary. Since we’re talking Hemmingway-esque postmodernism, it’s a very short read.  (rant over)

Banana Fish pushes Sallinger’s original work, stretching it into several different directions in a way that embodies multiple social struggles: Sexual assault and human trafficking, racial tensions in America, gender constructs and expectations, homosexuality and male friendship. There are so many different nuances—so many perspectives and topics—densely packed into this 24-episode show. I’m reminded of many of my college literature courses: how a text can offer a multitude of critical lenses for exploration and there will always be more ways of looking at something— more to learn and discover. I know I won’t be able to cover all of them. There are just too many, each with its own deep and branching path. But I’ll try my best to hit on a couple points  in hopes that you’re intrigued and give it a watch, and maybe, if I’m lucky, you’ll share your thoughts, too.

I’ve decided to focus on two parts: trauma—specifically, sexual trauma for children—and its psychological implications, and how, in the face of such trauma, we as humans are supposed to cope and develop or pursue a meaningful existence.

Sexual Trauma in Childhood and Implications

I am a survivor of childhood rape and incest, along with physical, sexual, mental and emotional abuse. My most recent psychiatric ARNP, while doing my assessment, said I had five lives’ worth of trauma packed into my 25 years.

There are some stories that I still can’t share with people. One of those is that when I was 15, I was sold by an abusive partner. I wish I was lying but I’m not. It’s something I haven’t even told my family, and will probably never tell them just because it’s so unbelievable. Luckily, they don’t read this blog. That was probably the darkest week of my life and one that I would never wish upon anyone. Ever.

I’m not trained in diagnosing. I’m not a psychiatrist or a psychiatric nurse practitioner. I’m not a counselor. I’m just a person with a long list of mental illnesses and first-hand experience. Please don’t take any of this as a substitute for a licensed mental health professional, doctor, or other qualified individual’s opinion.

The people who are close to Seymour and Ash scorn their irrational behavior, while their actions are actually key tells for internal emotional suffering. Ash has experienced several traumatic events which would trigger a whole long list of mental health concerns. Let’s get into those, shall we?

I mentioned earlier the war connection between Banana Fish and Sallinger’s story. Let’s dig into that a bit more. The clearest connection is Ash’s brother, Griffin, serves in the Iraq war, right? But a more astute observation leads us to acknowledge the war Ash has been fighting his entire life; the war many of us have faced or are continuing facing; the war of sexual assault.

A friend once described BPD to me as what happens if you’re a kid with PTSD and you don’t get help. She described it has PTSD growing into BPD. And while they are different, they have many similar characteristics, specifically related to trauma, moods, etc.

Early childhood trauma is common in BPD, and can include early parental loss/separation, neglect and abuse (physical, sexual and verbal).

Ash is caught in the push-pull so many with BPD face– the equally intense wanting and rejecting of close relationships. Ash has been either intentionally or unintentionally abandoned by countless people throughout his life, and now has a personality which obsessively thinks about Eiji. Ash worries for Eiji’s safety, values his opinions, and relies on his softness—that unconditional support and love which only Eiji has offered.

Ash is raped again, and this time it’s worse than before. Once the initial adrenaline wears off, he’s left anxious, trembling and confused. I would assume he would be dizzy or have clammy skin as well. It could just be PTSD symptoms, but I thought I’d include it here as well.

When Ash is forced to return to Dino Golzine, he undergoes a severe mental breakdown, calling himself a toilet in a scene that is nothing short of the word harrowing. He ends up not being able to eat, from what I assume are a combination of depression and anxiety symptoms. Every time he tries, he vomits. He’s constantly tired, to the point where he cannot stand and must be wheeled about during a party.

Postmodernism is the writing rooted in the disillusioned period after WWII. This type of literature rejected the pre-WWII western idealism,  using rhetorical  narrative devices like metafiction, unreliable narration, self-reflexivity and intertextuality. Kurt Vonnegut, Don DeLillo and T. S. Elliot are good examples here. Each episode of Bananafish is named after a canonical text, many of them postmodern, and directly embodies this same intertextuality.

A guy I want to mention right now is Viktor Frankl, an Austrian psychiatrist and neurologist who took up the reigns of psychology from Carl Jung. Frankl lived through the Holocaust, survivng Theresienstadt, Auschwitz, Kaufering and Türkheim. He went on to write Man’s Search for Meaning (previously published as Nevertheless, Say “Yes” to Life: A Psychologist Experiences the Concentration Camp and From Death-Camp to Existentialism).

“What is to give life is to endure burning”

He goes on to suggest three methods for finding meaning:

Banana Fish’s Exploration of Purpose and Meaning through Relationships

According to these ideals, Ash’s previous meaning for life was protecting the weak and vulnerable youths in his gang. Like Seymour, he either unknowingly or knowingly interacts with those younger than him to help distill the unfathomable complexities of the world. By teaching others, we can prove we understand something ourselves, and we can provide support and stability, In a world where his life is at risk every second of the day, he forces responsibility onto his shoulders as a coping mechanism and reason to continue.

One of these instances is Skipper, a lovely, lively lad who captures our hearts.

He’s killed very early on in the series, and his murder is a painful one. He clearly is more than an underling to Ash; he’s more like a younger brother, and the closest thing to family Ash still has. His death is a symbol for Ash’s failure and choices. It is a very real representation that his decisions– like protecting Eiji– can cost him the lives of those he holds dear.

Another example is when Ash comforts Max’s son, Michael, who is crying because of tensions at home. I can’t remember if this happens before or after Jessica and he are kidnapped, just that it happens. In this instance, it doesn’t matter when; what matters is Ash is providing the comfort and understanding that he wanted and needed as a child. When he felt unbearably alone, he craved this kind of relationship: one of safety and security where he could just cry.

The closest we have to a positive “adult” relationship is with his best friend, fellow gang-leader Shorter. Now, I use air-quotes because the two often act like the late teenagers they are, that is when they’re not trying to escape stray bullets. But even with this comradery, there remains a level of distance and not-trust.

This is in part what makes Shorter’s betrayal and death so heartbreaking. Ash loses the only true friend of his gang life, and life pre-Eiji. In the midst of so much change and chaos, he’s forced to murder his best friend to save Eiji. The trauma he experiences is undeniable, but even more so, there would be feelings of abandonment. Jadedness. A paradoxically painful numbness.

So, his gang/youth community temporarily brings him purpose, sure. But who comforts Ash? Who holds him in his times of need? When is he allowed to be the child he both is and never had the chance to be? Later on, whom does Ash view as his complementary equal? Who can laugh at him? Cry with him?

While I wouldn’t say this relationship is more important than the previous examples, I will say that there is something to be said for doing something out of willingness rather than obligation. There’s a certainly level of intimacy which only can be obtained through mutual openness, respect and vulnerability. For the first time in Ash’s life, he’s accepted for who he is in his entirety; he’s loved for more reasons than what he can do for others; he’s provided for, rather than being the sole provider.

Eiji is Banana Fish‘s answer to Frankyl’s question of what makes life meaningful in the face of unavoidable suffering. Unconditional love and acceptance. Eiji is the warmth of Ash’s tundra-esque life— so much so that he’s burnt by such compassion, and finds it unbearable at times.

Would you believe me if I told you this post took me two months to write?

This was a hard one for me to do, but I’m glad that I did it, and I hope it helps someone. If you haven’t watched Banana Fish yet, please do! It’s available on Amazon Prime. I’ve given it somewhere between a 4.5-5/5.

Watch on and take care, Annieme-niacs.

With smiles and love,