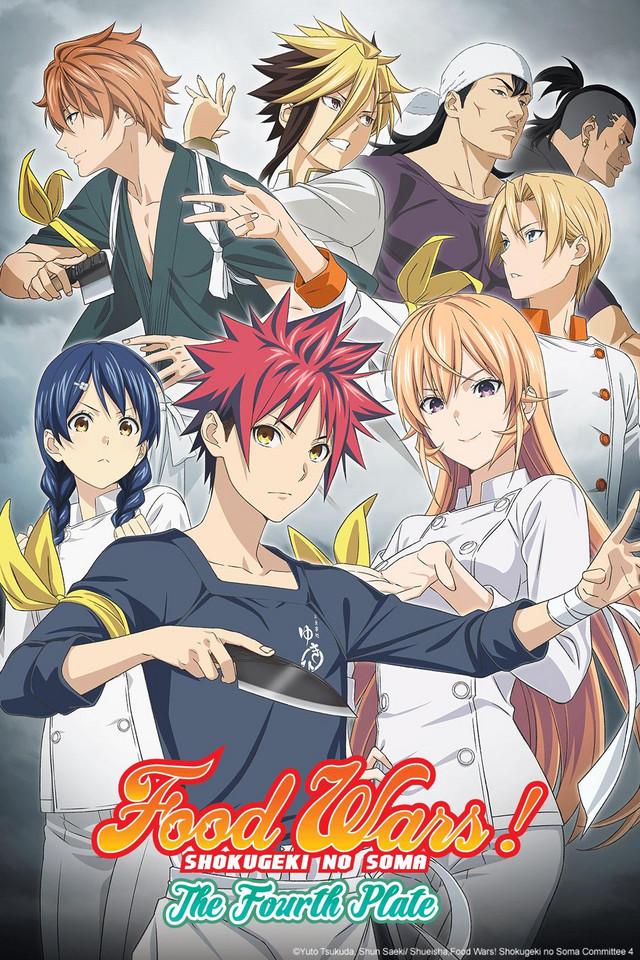 This is the series review of the fourth season! For season three, go here.

Characterization: 3/5
A stretch, here. The characters in the series have brought me many laughs over the years, and their individual quirks often make me smile. But I’ve generally found character development with the female cast instead of the males. Erina and Megumi are the highlights.

Plot: 2/5
None of us came into Food Wars! for the plot. And tbh, I don’t think we’re really staying for it, either, because it’s pretty dull. This season is all about our rebels cooking against the elite ten to win back their school. My problem is with the last episode.

Realism & Authenticity: 1/5
I’m beyond disappointed for this point. I loved the first season of this show so much, but it’s like I’m watching a poorly written fanfiction of it instead. The sexuality doesn’t tap into the humor in new or refreshing ways. It’s lackluster and just… bad.

Sound & Animation: 2.5/5
Pretty decent. Nothing extravagant, mind you, but I wasn’t bored thanks to the soundtrack sending me to war. I’ll say that most of the time it feels less like true animation and more like panning over still images like Windows Media Maker… so there’s that.

Food Wars! was a gem I found while studying abroad in the UK. The first season was downright saucy (puns forever intended) and blended humor and ecchi in a way that had me crying from laughter.  Since those prime days, though, the series has gone downhill, decreasing in funnies and spiciness.

In truth, the characterization is frustrating: some points are good and some are bad. We get little nuggets of truth for most of them: why Tsukasa and Rindou, the first and second seats respectively, side with Erina’s father, for one. But it’s really not enough to add meaningful depth. Even Azami Nakiri’s motivations are tepid at best. You’re telling me you expelled students and disbanded countless groups because you’re upset your buddy just went off on his own and did his own thing? Seriously? What kind of character motivation is that? Give me something proper and juicy for a “villain”, please.

Megumi’s characterization has always been spot-on for me. Not only is she the ultimately wifu, but the girl fights crushing anxiety everyday. We’ve gone from the timid thing writing the character for man on the palm of her hand to battling the third seat at this team shokugeki. Some people complain she cries too much, but hello: she’s a cry-y character. It’s written into her arc to cry, so let’s not get upset over being properly consistent, all right?

She doesn’t win against Miss Cute Baker or whatever. And the boys do their best in comforting her.

But it’s Erina who gets through to her.

The tears are important. Why? Because they’re not shed from fear or shame. Megumi gave her best effort and fell short and her tears lie from frustration. She has pride now, some confidence even. This is what she’s gained from Soma and the others, and the reason for why she fights against Central in the first place.

Besides Megus, most characters are surface level and only exist to provide exposition and context rather than being proper characters, background or otherwise. We get a touch here and there with Takumi and Isshiki, but most of the time it’s just like eating prawn crackers at a curry shop: that stuff isn’t gonna fill you up or nourish you if you know what I’m sayin’.

Except y’all don’t really train (on a train) do ya? We just get some poorly done flashbacks of Megumi wanting to be in a sports anime playing ping-pong instead. The plot points feel largely cyclical, in part from the nature of what the show’s about, but it’s done worse than how the autumn elections were handled. Nothing feels overly fresh or exciting and the cookie-cutter episodes just add to the horrid predictability.

We know from the onset Soma and his gang are gonna win, right? I mean, this is a shonen show. The whole point is discovering how they’re gonna win. We know where our destination is, but we’re still unsure about what the journey will hold. However, Food Wars just painfully shows us its hand painfully slowly and using atrociously predictable plot. Talk about boring. It doesn’t even feel like cooking anymore, not really. One of my favorite parts of this series was that I felt I was learning a little bit more about food. They’ve somewhat taken it out of the equation here. Instead of really seeing how things are made and why, we’re given words from the peanut gallery, some gutter quality trash talk, some flashbacks about the characters and then the food part is done. They present the dishes and we’re supposed to think the dish is special because of what our jailed peanuts say. There’s no real knowledge exchanged in all this, and it overall makes the series less impactful and memorable.

The concept of the gifting was just silly. You’re seriously going to tell me a guy can magically make other peoples’ clothes disappear when he’s not even biologically related to the Nakiris?! Hold my whisky.

But Annie! Maybe the entire point is about character driven plot and stuff. Characters? Really? We’re hopping back to that point when we consider the majority of our minor characters were shoved into a literal jail and reduced to audience oohs and ahhs?

But I digress. Let’s take a look at the main character for growth: Erina Nakiri. Throughout seasons three and four Erina has shown unbelievable strides. Here’s one of her main bits:

While there’s no doubt Erina develops as a character, I have my reservations about her cooking and specifically, her ‘specialty’. She calls it a ‘don’, or a rice bowl. Her ‘secret ingredients’ are a combination of squid and peanut butter, and she uses the gelatinous substance (which Soma uses in season one’s God Tongue episode).

Soma. Her specialty is Soma.

You’ve got to be kidding me.

Throughout this time, the first OP from season one in playing, in case, for some ungodly reason, you didn’t catch all of the allusions going on. And while I love that OP and wish the series stayed with that theme instead of going to the edgy, we’re going to war business they’ve been doing since season two, it’s really nothing more than a cheap shot at nostalgia feels. Like, season one was a lot more successful… you know what we could do? Play that OP and we’ll magically be as good. Yeah, best plan ever.

The time skip is the other frustrating part of this series. For the final episode, aptly titled “The New Elite Ten”, we get to see our cast of characters as a grade higher, even though time has had a weird flow since season two’s autumn elections. To show that time has passed, people are given… NEW HAIRSTYLES! OMG. -_-“ Please, no.

There were positives to the series, and overall I’m left with feeling a mixture of ranty and meh. It was flat on so many levels, but Erina and Megumi’s growth, plus Takumi’s win made me smile. The music was okay, though feels very much the same for seasons 2-4.

Let me know what you think in the comments below!