While studying abroad in the UK, I learned a lot about taking care of myself, and becoming a person who could be confident in my abilities and decision making.

One day, I was pretty bummed out because my experience wasn’t what I thought it’d would be: where were the adventures? Where were the nights out at pubs, drinking with friends? Where were the afternoons gallivanting around ruins? The morning breakfasts filled with tea and writing?

I was incredibly lonely. I was disappointed. And I didn’t know how to get out of this cycle of lonely and disappointment.

Eventually, I came to the profound realization that I didn’t need an excuse or another person to go out and have a good time. The only thing that was stopping me was me.

I was reminded of how I love going to concerts by myself: I love the thrill of being right in the action, and when you’re as small as I am, it’s easy to get to the front of the concert pit– people don’t mind because you’re literal heads shorter than them. When I went with friends, I also most always was more focused on them than on myself. I wanted to ensure they were having a good time, that they were enjoying the music. I couldn’t have cared less about myself.

And so that night, I grabbed my purse, journal and leather jacket, and discovered what would become my favorite pub in the city.

Who are you looking good for?

After that, I took myself out to have lunch one day, wearing a summer dress and a smile. I radiated. People were kinder to me— some going so far as to ask me out on a date. Who’d have thought: Self love and taking care of oneself is actually a pretty attractive quality.

A third time, I journeyed back to the pub to work on one of my final projects: a rad poem about feminism using witchcraft as a metaphor for female oppression and strength. And after about an hour or so, I was joined by a woman who was an artist, and we talked politics and interests and eventually attended a meetup together! 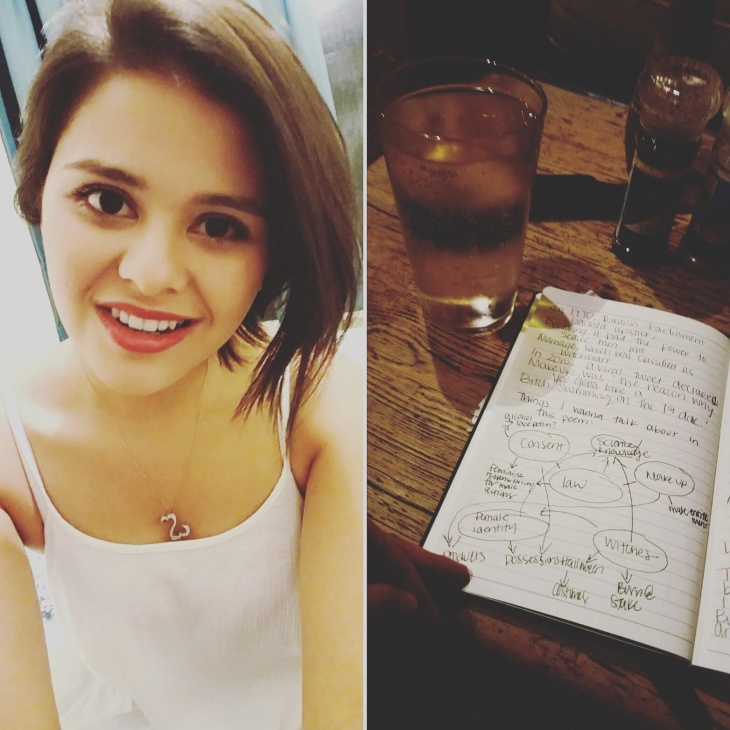 Last Saturday, I took myself on a date.

And it was glorious.

I made a delicious dinner. I curled my hair. I put on lipstick and matching heels. I felt badass, sexy, fun and flirty, all for me. I went and saw Weathering with You at the cinema by myself. I had a whole row just for me, and I was in the center of it. I brought my snacks with me, along with some luxurious fuzzy socks in case the theater was too chilly and I got cold feet, both literally and figuratively.

Up until the last minute, it was so hard for me to go. I was tired and lazy and I found myself thinking: I could just stay home and binge any number of episodes on Crunchyroll, or Animelon, or Funimation or whatever. But you want to know the deep-seeded truth lurked behind all of these excuses? I didn’t think I deserved it. I didn’t think I was good enough to take to a movie.

If you’re anything like me, you’re painfully uncomfortable if the attention is on you in most cases. I don’t like focusing on me; I prefer focusing on others. Society has taught me over my twenty five years, that I am in no way worthy of care and kindness and affection, and it has been my mission recently to slowly and steadily unlearn all of the ways I’ve been socialized to hate myself.

I didn’t want the experience to lead to an anxiety attack, either. I didn’t want to have to leave the film because I needed to hyperventilate in the bathroom stall because I had been too focused on making sure I had a good time, or worried what other people might thinking of me taking myself to a movie.  So I was constantly on the seesaw of should I go or not go.

You know what got my butt out the door in the end?

Friendly reminder that there's no shame in taking yourself to the movies to see weathering with you or any other film. Take yourself on dates, y'all. It's what I'll be doing Saturday night 💙😊 pic.twitter.com/tBZder7H4Z

Yup. It was my tweet from the night before. The commitment I had to walk my talk was so strong, it offered the same kind of accountability as going with a friend would have. Additionally, seeing all the positive interaction with it really encouraged me that this was a good and right thing to be doing. So for all of you who liked or retweeted, thank you. You helped me be brave. 💙

This is my number one recommendation, because you don’t have to go out for it. You can cook a really delicious meal for yourself as you would for a date, and it accomplishes the same brain chemistry, without having to be out in public. A win-win for the introverts like myself.

Concerts and open mics are nice because they allow for total auditory stimulation while retaining anonymity. And, frankly, no one is going to notice you went by yourself, nor will they care.

Going out to a specific place is nice because you can take your time— you don’t have to feel rushed or like you’re going a snail’s pace. And you’ll learn a thing or two!

Ultimately, I think a lot of cultures are so focused on finding ‘someone’ when a lot of us haven’t even found ourselves. Like we’re supposed to give another person our hearts when we haven’t yet become accustomed to them beating in our own chests. There’s so much pressure. So much expectation to be a certain way, or to do certain things. When we go on dates, we’re trying to impress others and to flatter them and show them a good time. What’s wrong with doing all those things for and to yourself?

P.S. You look cute today, rebel renegade. Bask in the sun-shower of your awesomeness.