“You can fly even higher.” 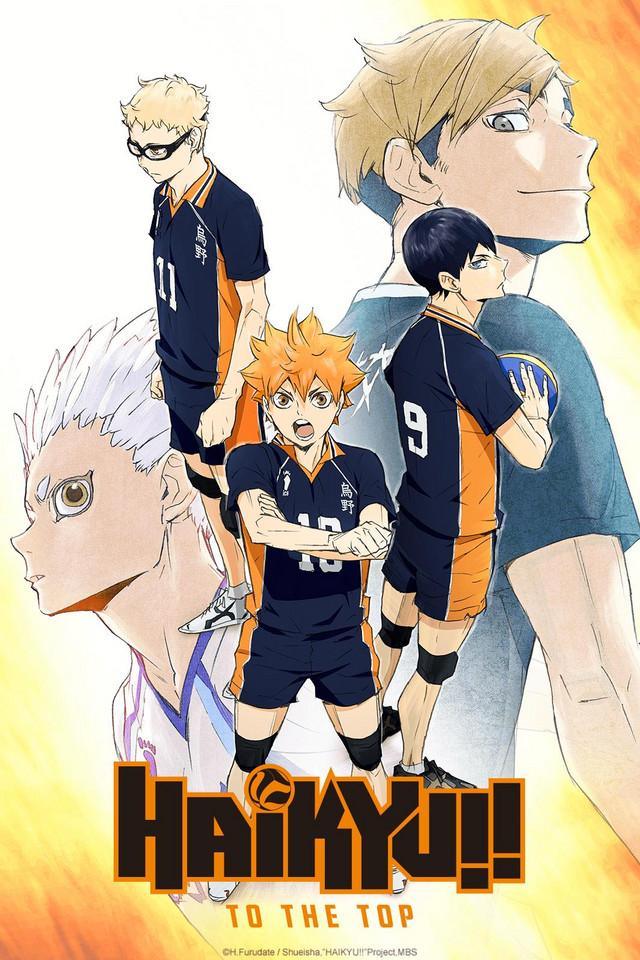 Haikyū!! To the Top is the fourth season of Haikyū!!, a volleyball anime following Karasuno High School as they journey to nationals. This review is for season four, part one. Read my reviews for season one here and season two here. (apparently I never wrote one for season three, whoops.)

Characterization: 4.5/5
Overall very good character development for our mains and lil bits and pieces for our supporting cast. Ultimately, the kind of character arcs we’ve come to expect from this series.

Plot: 4.5/5
Mainly a training arc, so if you’re not into those this probably isn’t your tea. I love em and appreciated how it was executed this season. Well-paced.

Realism & Authenticity:4.5/5
More slice of life feels to this season than previous ones, but still very good. Realistic pacing for plot and character arcs.

Sound & Animation: 4.5/5
Character designs are slightly different, but the animation quality is still top-notch. OP is by Burnout Syndromes again and it’s fire. ED is by HoneyWorks and is also great.

The Crow Crew is back and headed for nationals! Go team!

I’m gonna be honest: I was nervous for this season.

Why? There were some changes to the production staff: 1.) Masako Satou replaced Susumu Mitsunaka as the Director. 2.) Yuu Kobayashi replaced Takahiro Chiba as the Chief Animation Director. There’s also the matter that season three was different from seasons one and two: it was only 10 episodes (the previous ones were 25), and received a subtitle, “Karasuno High VS Shiratorizawa Academy”. I was worried we might be getting another one-match, short season, but since they’re blocking season four into two parts, each 12 episodes, that was luckily not the case.

But honestly, I was pleasantly surprised. While the character designs aren’t identical to the previous seasons, they’re still excellent. They’re simpler, for sure, but that doesn’t mean they’ve gone down in quality. We notice, too, that the manga designs have also changed and the anime does a pretty good job of following through with those changes. It’s natural for drawing style and design to evolve somewhat when it’s a long-running series and Haikyū!! is no exception.

The plot is a refreshing one. Karasuno takes victories over Aoba Josai and Shiratorizawa in slivers. In order to make a case for another season and for them to be competitive at Nationals, they must improve both drastically and quickly. Therefore, the long and detailed training arc is absolutely necessary for character and plot development. It’s also a nice break from the series of intense games we had been seeing for the past season and a half. Hinata and Kageyama take the spotlight here, though we do see snippets of our supporting cast as well.

Hinata’s growth really make sense. He really only has his speed and jumps going for him at the moment, but given his super-human reaction times, he could easily transition these skills to receiving. He could become a multidimensional threat, rather than just the ultimate decoy. Instead of putting our dude on the court, he’s forced to become a ball boy.

While initially frustrated, this period allows him to watch the chosen players and glean new techniques and skills. He begins to see things he never could see while practicing and playing. And while he’s not the sharpest tool in the shed (or, rather, the quickest ball on the court), he begins to think more critically about other players actions and in turn, his responses to those actions. We see this when he uses a tennis technique (via flashback, demonstrated by a childhood friend) to help him square his stance and prepare to receive.

Kageyama, too, receives ample development. Haunted by his previous dictator-like leadership, he has turned a 180 from his old self. But this isn’t real growth– it’s a facade of growth. He’s denying certain parts of himself: the bluntness, the obsession to improve. And he’s called out on it for being a “Goody too-shoes”, or a people pleaser. When he returns to our lads, he’s disheveled to say the least and eventually snaps at Noya who’s “In the way”. The team accepts him for who he is, though, and his development is finally real.

One of my problems with this season is the treatment of Kinoshita, one of the two remaining forgotten second-years. He’s basically taking on the role of Yamaguchi 2.0, where his value is his serving. The problem with this is they’ve been developing this role for Yams since season one, and they decide to do this in an episode for Kinoshita. It’s just not that believable. It just seems like the writers are saying: “Well, we gotta give him something.”

Ultimately, it was another good run for our boys. Looking forward to part two!

What about you guys? What did you think of this season? Let me know in the comments below!