“In the hearts of men lie both good and evil. The two coexist. Some men become good, and others become evil. It is the way of this world.” 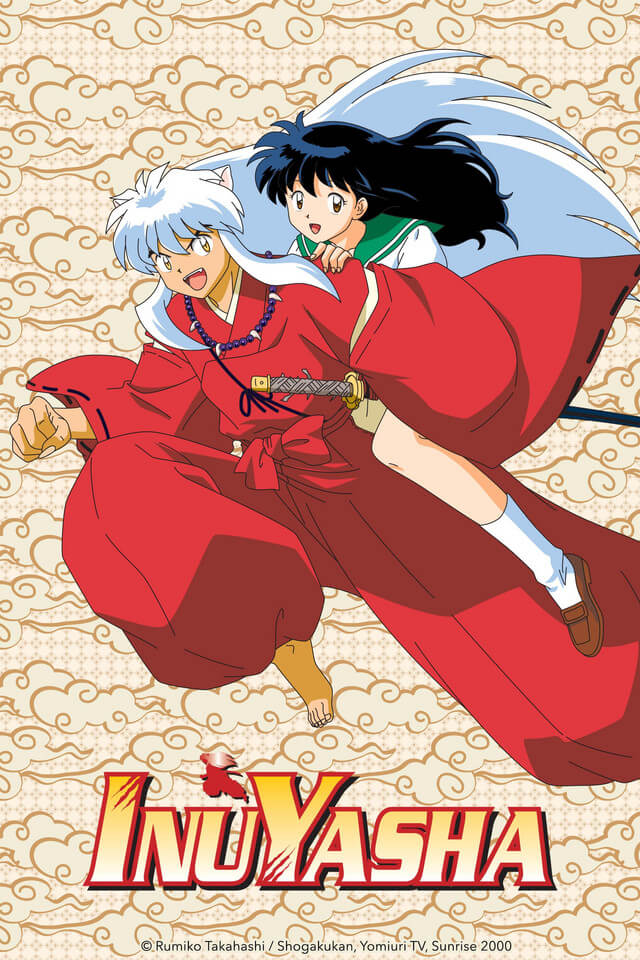 InuYasha follows Kagome Higurashi, a normal fifteen-year-old teenager living in Tokyo at her family’s Shinto shrine. One day, her world is turned upside down when a demon drags her into an old well and she’s transported to the feudal /warring states era. To her surprise, Kagome is the reincarnation of a priestess, Kikyou, and has a powerful, wish-granting jewel (the Sacred Jewel) inside her.

In order to save herself, she frees a half-demon named Inuyasha. After another run-in with another demon, the Sacred Jewel is ripped from Kagome and shattered, scattering across the world. Kagome along with Inuyasha are joined by Shippo (a fox demon), Miroku (a monk), and Sango (a demon slayer), on their quest to recover the Sacred Jewel shards. But an evil demon called Naraku stands in their path, and is determined to plunge the world into despair.

Characterization: 3/5
The protagonists are fairly realistic and developed, whereas our main villain is very shallow. The series boasts a medium-to-large cast.

Plot: 2/5
Poorly paced and redundant. Think Naruto but not as bad. While the events are entertaining enough, there are too many that are the same and fulfilling identical functions.

Realism & Authenticity: 2/5
Inconsistent world-building throughout the series, which hits both realism and genre pretty heavy.

Sound & Animation: 3/5
Sound and art reflect the era the anime was made, and are tolerable. Bright colors, square/rectangular shapes, etc. The last episode seemed to be of higher quality than the rest of the show. The soundtrack is pretty standard, with no real stand-out points.

Kagome and Inuyasha exhibit the most growth, as to be expected. Kagome is convincing as an average teenager and does show authentic characteristics (e.g. envy, naivety, stubborness, etc). Her virtues outweigh her flaws, but don’t deny their existence. We see this specifically when she chooses to heal Kikyou, and then later reflects on her jealousy. Similarly, Inuyasha goes from “wanting the sacred jewel so he can turn into a full demon”, to “not letting any evil obtain it” in our last episodes. This change is gradual and we assume it is because of his interactions with Kagome and Kikyou. He also focuses on not harming humans, now that he travels with them. To contrast, Sango, Miroku, and Shippo all receive little meaningful growth for being “main characters”.

My biggest problem with the series lies in its inconsistencies. We’re told that apart from Kikyou, Kagome is the only person who can see and sense the sacred jewel shards, and yet on multiple occasions various side characters, namely villains, announce they sense a shard. One example of this is when Renkotsu takes the shards from Kagome’s unconscious body. There’s no explanation on why he would know she had the shards. The only reason I can think of is Naraku might have told Bankotsu who might have told Renkotsu. But there’s no actual evidence for this happening.

A lot of people are under the misguided belief that if a series is in the sci-fi and fantasy genres, realism can get chucked out the window. But that’s just wrong. In fact, with these genres the writers are required to be more diligent and consistent in order to make the work believable.

Perhaps a more glaring fault of InuYasha lies with its plot. Unfortunately, the same plot devices and events are used with little meaningful change, and this makes many arcs feel redundant: someone abducts Kagome; the Wind Scar doesn’t work; Inuyasha goes to/chooses Kikyou; Kohaku does bad stuff, meets Sango, and then is taken away; Miroku’s flirting gets him into trouble with a demon. It gets to the point where we can cut out a solid 100+ episodes without negatively affecting plot and character development.

The final problem I’d like to address involves our big-bad, Naraku. As far as antagonists go, he’s oen of the more flat ones I’ve seen, with his motivation just being to f*ck things up just because. There’s no empathy for him; there’s nothing relatable. He’s just evil for the  sake of being… evil. “But he’s a demon! It’s in his nature to be pure evil”. Not true for general storytelling, and not true for this story. Just look at Sesshomaru: he’s far more developed and convincing than Naraku, especially when he comes into contact with Rin. Kagura is a far more interesting villain, as she shows change, conflict and depth throughout the series. It’s unfortunate that we see other antagonists portray proper characterization, but out main antithesis is left to fall short.

Ultimately, I was pretty disappointed in the series given how popular it was. I much-preferred Yona of the Dawn and would recommend that series instead. What about you guys? What did you think? Let me know in the comments below!